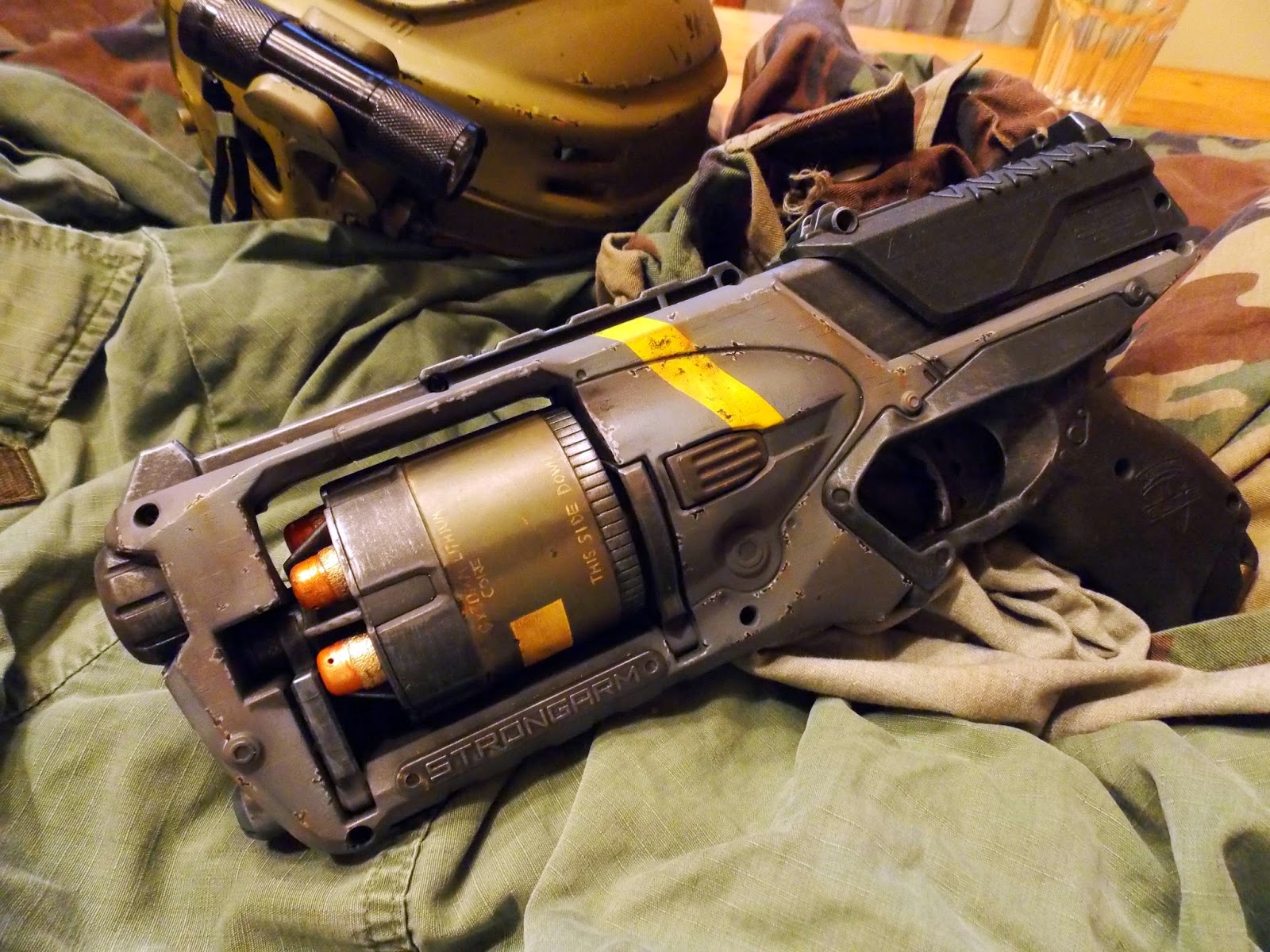 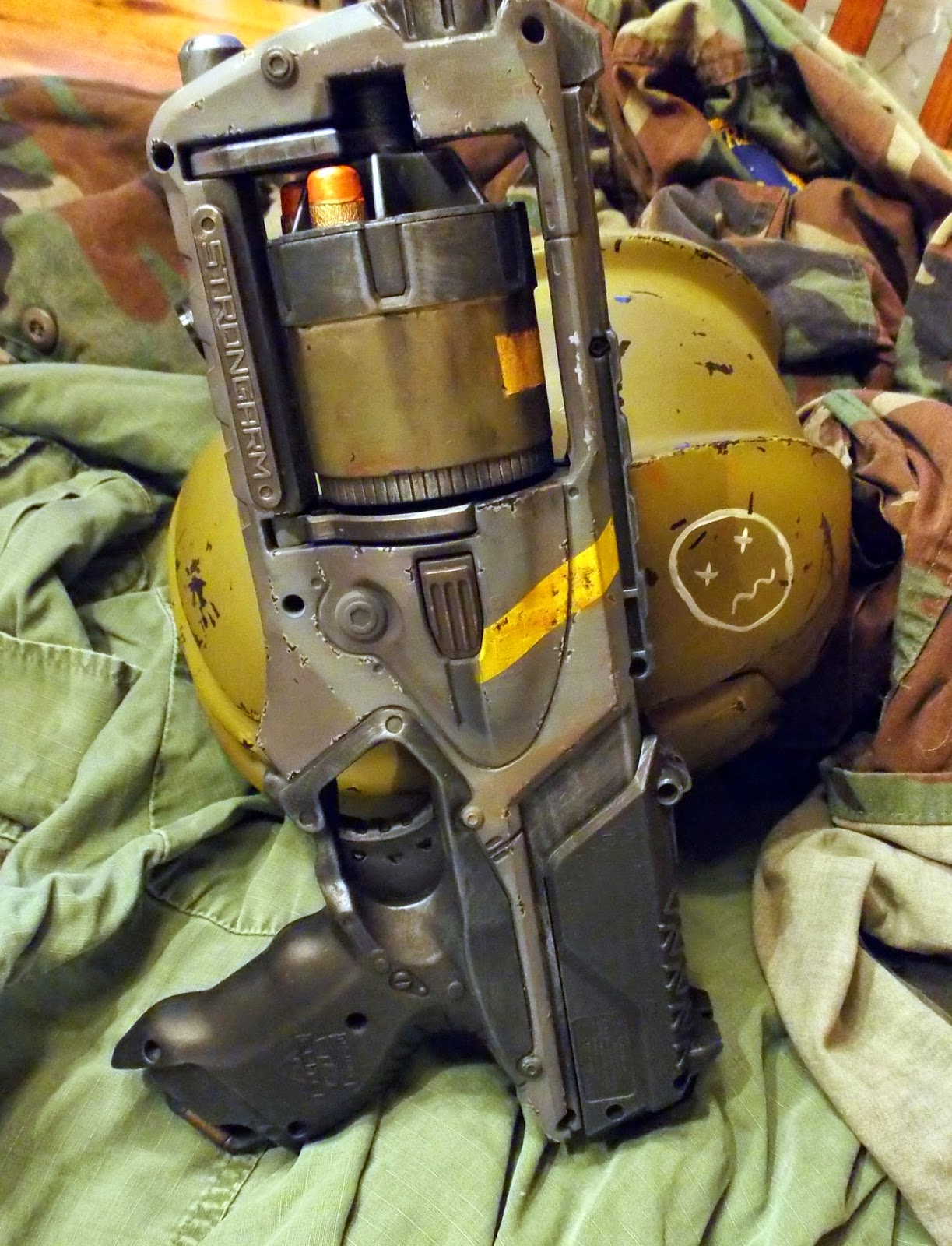 After the last update, I decided to focus and get this gun finished. I began to fall in love with the gray tones and the process of aging and shading it. This gun was a little different than the other Nerfs I've painted in the sense that it didn't seem to come apart easily. I decided to do some taping and begin painting. The gun itself is Nerf-N Strike "Strongman". The structure of this gun is perfect for painting. Lots of surfaces and patterns to play around with. I'm no expert but apparently the N Strike has quite the reputation for range and power.As a painter, they are also great because they represent a pretty wide open "canvas". Plus! They are relatively cheap coming in at little over $15.  If you like this gun, visit me at Esty.
As always comments and questions welcomed.

Posted by Unknown No comments:


I had a very productive day today. Probably because of the three double espressos I had. I'm getting kind of excited about this one. Still in the working stages and needs weathering and some detail work but I think it's coming along.

Question: Do I file off the "Nerf" logo or leave it? Thoughts anyone? Comments welcomed.
Posted by Unknown No comments: 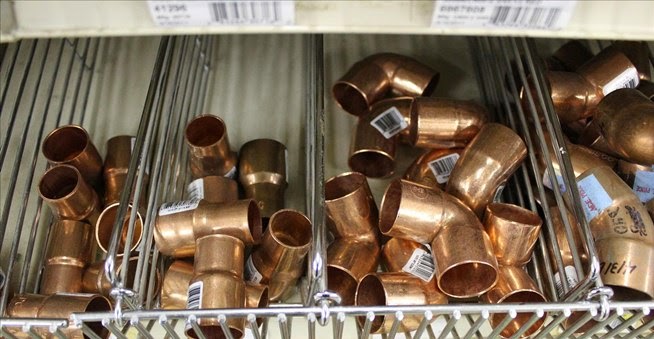 Buying Parts or "I Try To Explain Steampunk To the Home Depot Guy"
Last week I found myself in the plumbing section of my local Home Depot looking for parts for my Steampunk USBs. I’ve got a bare flash drive in my hand, and I’m inserting it into all types of copper pipe sections. I throw a section back, pick up another, try a cap, a splitter, try putting a coupling on there, all with various levels of success. Out of the corner of my eye, I catch the Home Depot guy eyeing me as he’s putting stuff back across the aisle.

“Can I help you with something?” He asks.

“No, I’m good.” I nod politely avoiding eye contact, not really wanting to have to explain. Home Depot Guy goes away, and I continue my mixing and matching of copper tubes. I insert the flash drive into every pipe end, eliminating the ones that are too small or big. I brainstorm so much right there in the aisle that I lose track and have to start over.

Home Depot Guy comes around the corner again. He’s been watching from the next aisle in a weird mixture of frustration and fascination.

“Well, I want to get this piece to go into this piece.” I try to sound casual.

“Why you trying to do that? I mean where’s the rest of the pipe? Under a sink?”
Cornered, I begin to explain.

“No, there is no pipe.” Holding up the flash drive, “I’m trying to get this flash drive in this pipe.”

“Why you trying to do that for?!” I might have well have told him that I wanted to stick a tuna fish sandwich in there. “Oh my God, what happened to your flashdrive!” Now he sounds genuinely concerned.

I try to explain, “I’m trying to get this flash drive into this pipe so I can make it look old, like something from another time.”

“Whatcha trying to do that for?!” Poor man.

Here’s where I commit to my cause. I get that to some people, perhaps a lot of people, there’s a weird element to what I’m doing. I mean, what kind of a grown man buys a perfectly good 16Gig USB drive protected in its own plastic case—a miracle of modern engineering—and takes it apart to put into a copper pipe. I try to explain.

“I want to make look old, like something out of the 1870’s or so. It’s called Steampunk.” I explain to Home Depot Guy. He furrows his brow but he’s listening. I go further. “Imagine if the world had stopped in the 19th century and Steam was the primary source of power. Imagine all our machines run on Steam and primitive electricity. Jules Verne, H.G. Wells? All that kind stuff.”
He starts nodding. “And people are into this stuff? Why would anyone want a weird looking thing like that?”

“Well, why do people want anything that’s different? Why do we want that car or shirt instead of this one? Fashion, style, novelty. Something to show some originality, right?”

Home Depot Guy nods some more, breathes out and then a miracle happens. He walks a few steps over to some copper couplings and starts suggesting ways to link them up. He starts telling me about how he made robot suits out of PVC pipe for him and his wife’s Halloween party a few years back. Home Depot Guy is now fully animated as he tells me about the joints he used, the duct tape elbows, and how well they worked. He even begins giving me ideas for my flash drive.

A few minutes more and I’m all set up with all the parts I need. Home Depot Guy and I part company, and I promise to go back and show him the finished USB. He says he’d like that.
As he walks away, he turns. “People really like that stuff? Crazy world, huh?”

I smile back, “Thank God, right?”
Posted by Unknown 2 comments:

I've been trying to post something new for the last few days, but work and the real world keep getting in the way.

I did have a good week in terms of what came in the mail! I'm been putting together all the odds and ends for my next couple of flashdrive builds. 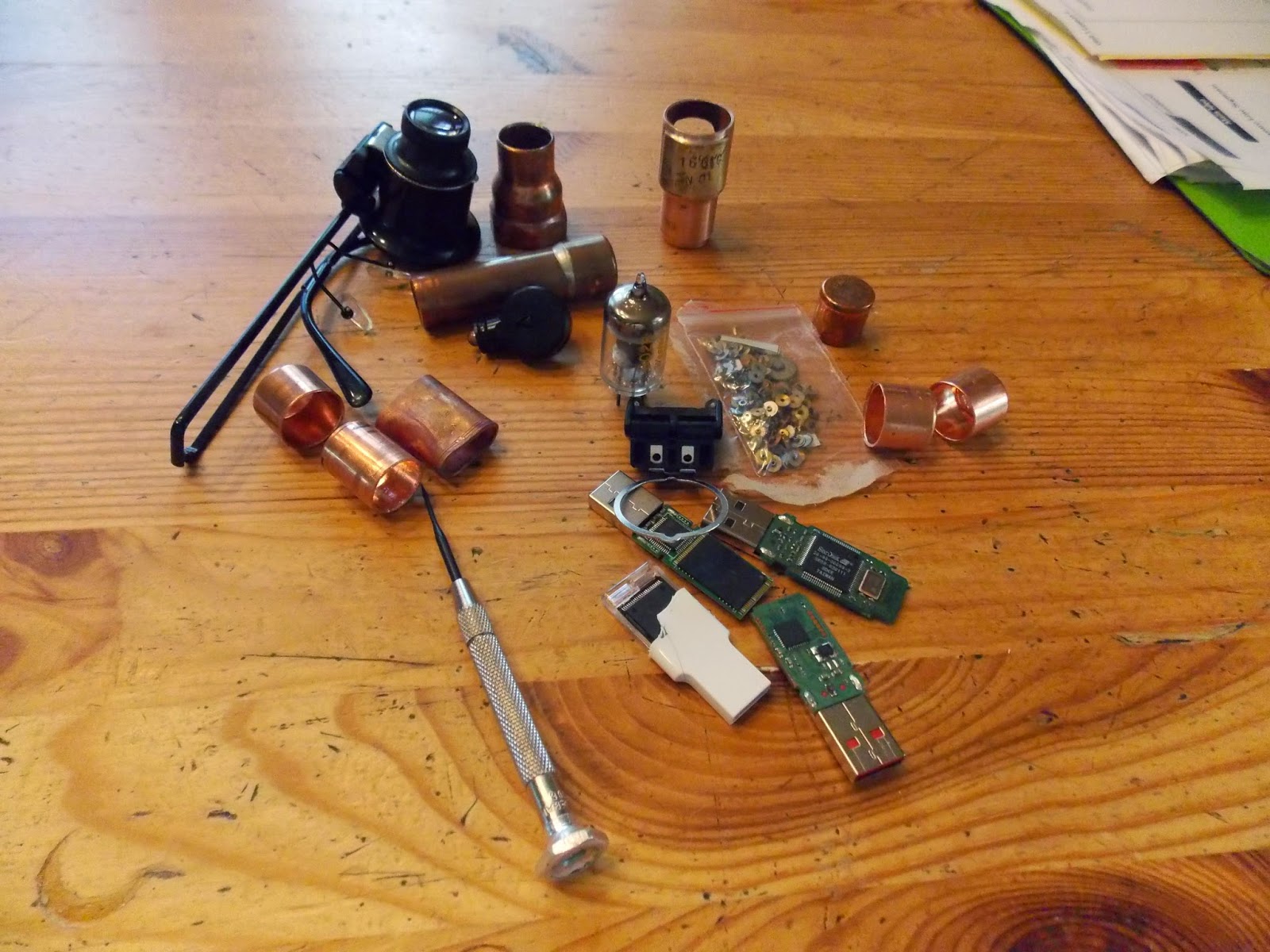 Here we've got...a few flash drives, an assortment of  copper pipe,  a Westinghouse vacuum bulb and
the big item, Magnifying Loupe glasses. These glasses are an excellent choice for anyone interested in doing some work on custom goggles. They are very affordable and come with a virtual goldmine of pieces: two lenses, two LED lights, and even a frame that can be used later.


There's alot of good stuff there. Now I just need to find the time to actually get some work done.
Posted by Unknown No comments:

This is my first, and as of yet, only Steampunk flash drive. I've been a big fan of the genre for years, always admiring from afar. Finally a few weeks back, after deconstructing images on the Internet for weeks, I decided to take the plunge. I got some copper pipe, some brass from my local Blicks Store, raided my basement for anything that could remotely apply, and went to work. 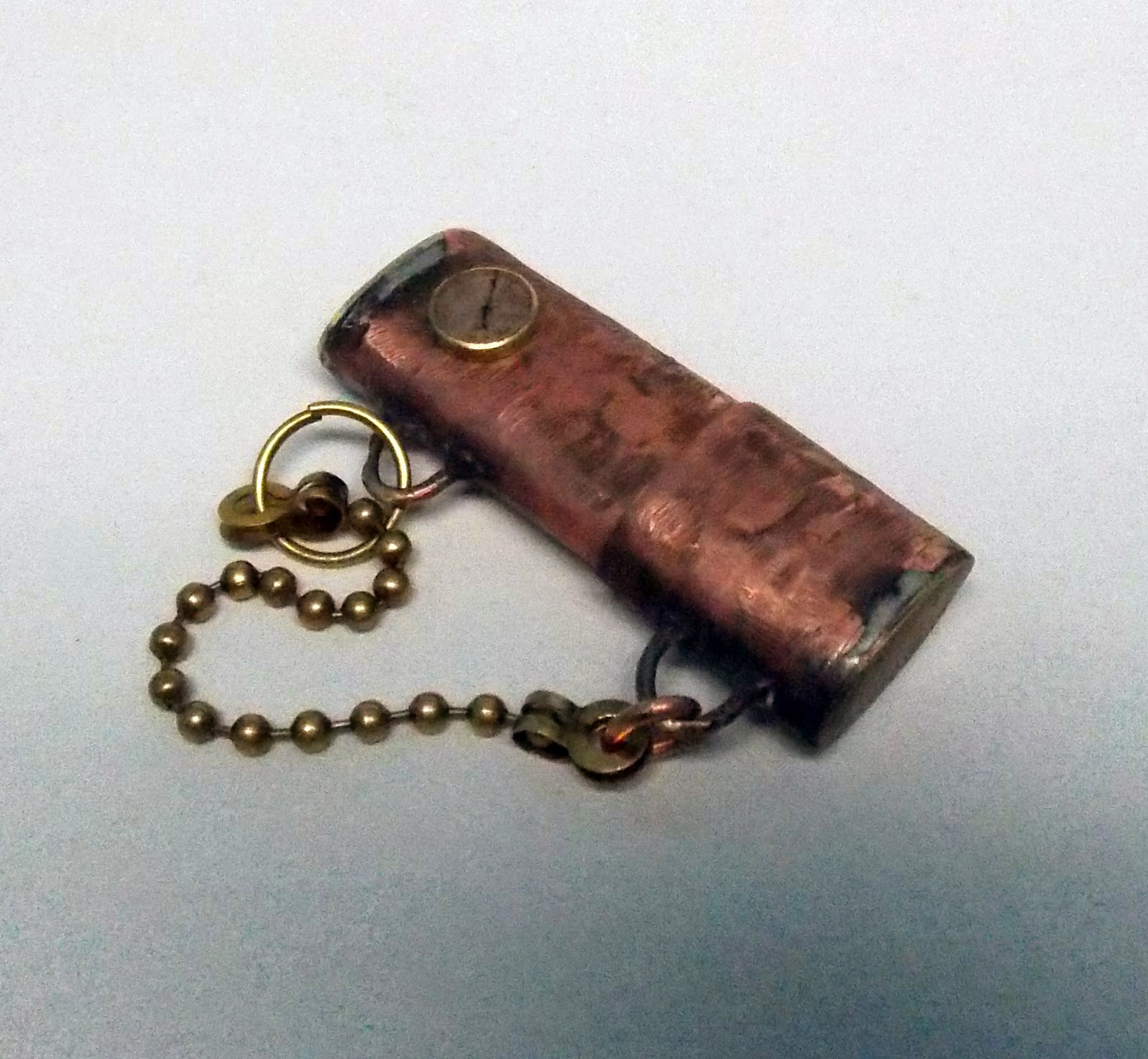 I commandeered the kitchen table for a few hours and began the journey of the apprentice tinkerer. To make a long story short, there was some hammering, some work on a vice, alot of Dremel work, and then soldering. Oh God, the soldering. My brain knew exactly what to do. Unfortunately, my hands and solder refused to do what I wanted. With some help from my retired Elevator Mechanic Dad and "All Around Master Tinkerer", I finally learned to have a clue about soldering. It is a real skill that requires practice, practice, and more practice all with a good amount of mess and failure. But I swear, if there's a Zombie apocalypse, save the "Old Elevator Mechanic"! That old man can make anything out of anything.

Finally, it all came together. I printed a dial on my printer, coated it with some resin for a glassy look and done. Altogether, this was a huge learning experience. It was the first time I've ever worked with metals-- I'm a modeler and painter of mostly plastics-- so all in all, I'm satisfied. Warning though: building one of these can be very addictive! I'm already brainstorming new possibilities and  seeing parts in everything from my wife's tea kettle to the kitchen clock. I now want to cannibalize everything for parts. I've also spent more than I should have on a whole slew of new Flash drives. Now my desk is littered with open flash drives and copper pipe. Yea, we have a problem now. 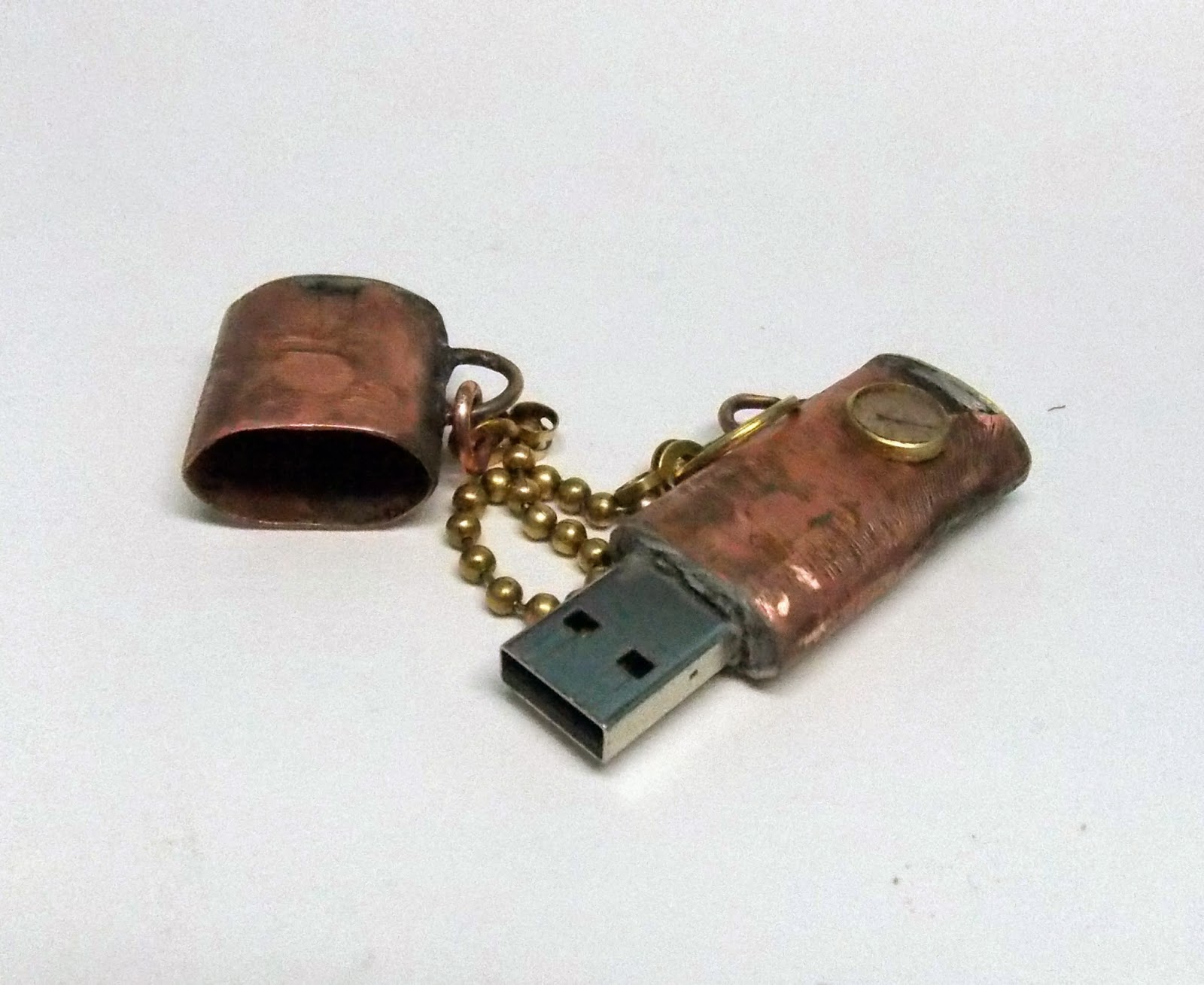 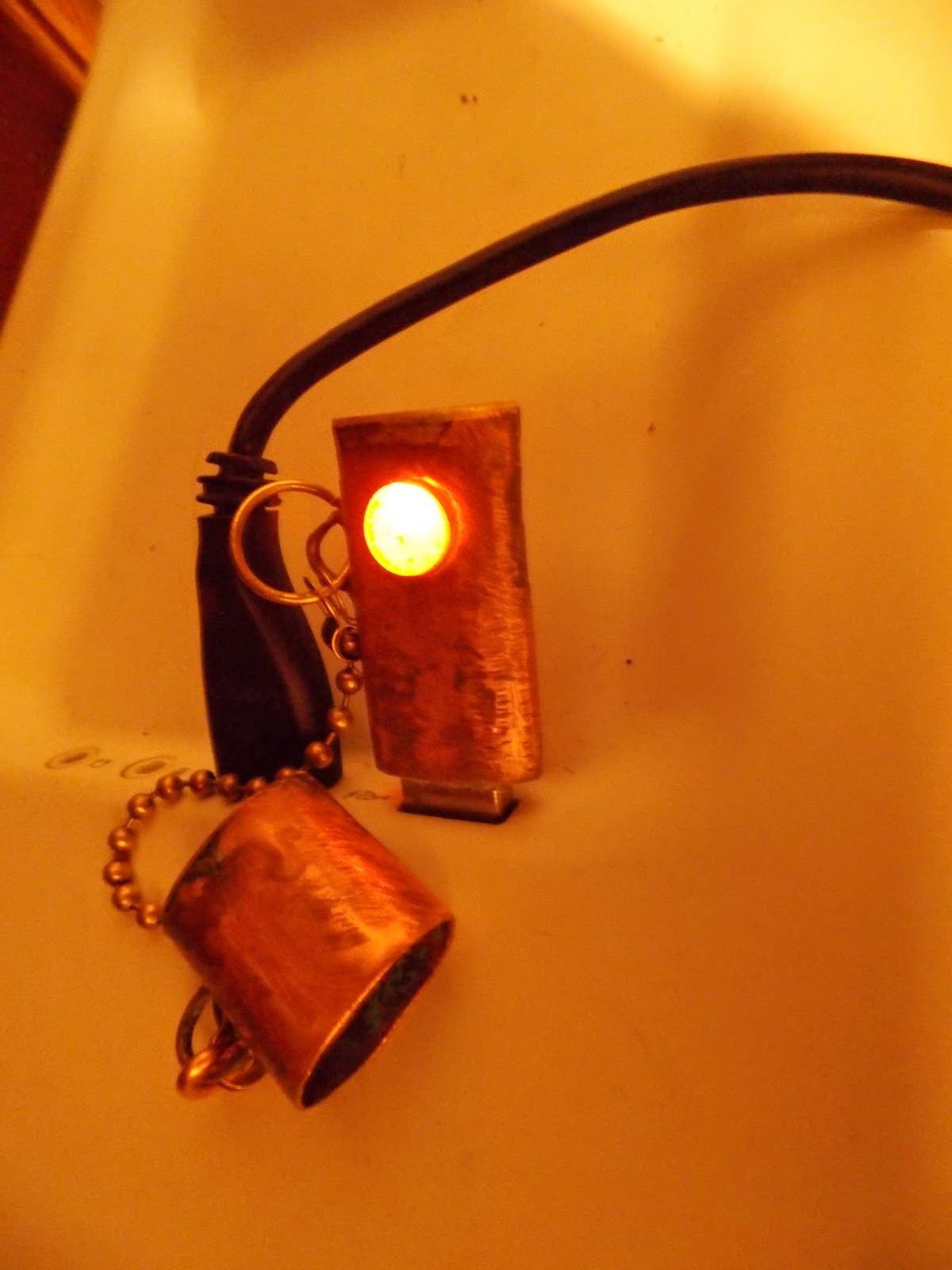 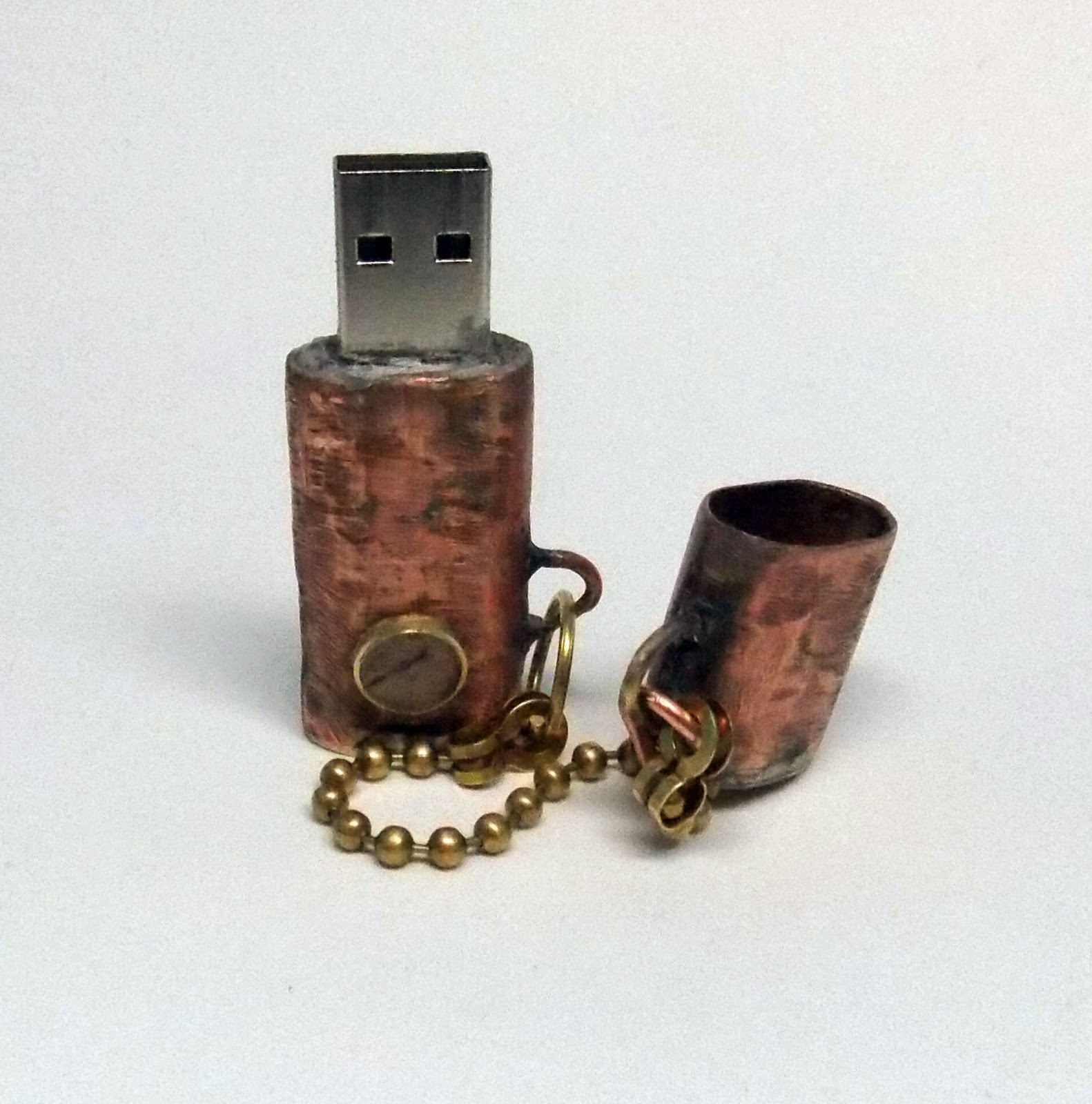 Posted by Unknown No comments:

OK, if anyone is passing through, you'll have to forgive our current state. We currently in the process of getting this blog off the ground and fairly clueless at this point.

"We know what we are but not what we may be!"
Hamlet

Yes, we are nothing now, but I can tell you what we want to be. We want to be a place where other geeks with strange and far flung interests can come and share, learn, and inspire each other. Not in the dreadful feely inspiration of motivational posters and guidance counselors, but inspire in the "see something you like and run down to the basement to make your own way". There'll be some tutorials and some bench blogs where I'll post pics of stuff I'm currently working on. There'll be some unboxings and reviews, random reflections on everything from favorite items to movies, and the occasional rant. So yes. It's going to be great. I hope. If not, we will go down to blog obscurity just like the millions of other newbie blogs people start every year.
Posted by Unknown No comments: